On this date in 1891, 39th Secretary of the Treasury William Windom died after 23 months in office. Previously, he had been the 33rd Secretary of the Treasury (for eight months in 1881). Before that, he represented Minnesota in the House of Representatives from 1859 to 1869, and then in the Senate from 1870 to 1883 (with two gaps of a few months each). The 63-year-old was the 11th of 22 Secretaries to die in office.

He was the great-grandfather of the actor William Windom.

On this date in 2008, Margaret Truman Daniel died at the age of 83. A singer and author, she was the only child of President Harry Truman. She was the Senior Presidential Child from November 17, 2005, when Warren Harding's illegitimate daughter Elizabeth Ann Britton died. Her death left the title to John Eisenhower, who was born two years before she was. His death in December 2013 made Caroline Kennedy Schlossberg the Senior Presidential Child.

On this date in 1843, William McKinley was born in Niles, Ohio. He was the seventh of nine children. After serving in the Union Army during the Civil War (future President Hayes was his superior officer), he represented Ohio in the House of Representatives from 1877 to 1882, and then again from 1885 to 1891. In 1891, he was elected governor of Ohio, and was re-elected in 1893. In 1896, he was elected the 25th President of the United States, with Vice President Garret A. Hobart. Hobart died in office in 1899, so for McKinley's re-election, he chose Theodore Roosevelt as his running mate. McKinley was shot in September 1901 in Buffalo, New York, and died of those wounds nine days later.

This photo, from July 2014, is from my visit to the William McKinley National. 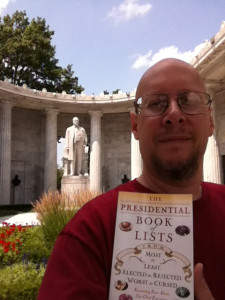